How not to visit Taroko Gorge

After we had finished our cycle up the east coast to Hualien we pushed on further north with the bikes to Xincheng reasoning that it would be easier to access the Gorge from the village. The cycle along the coast was beautiful, we went past gorgeous sandy beaches with big Pacific Ocean waves crashing down on them.

When we arrived in Xincheng there wasn’t a whole lot of stuff there, like places to eat or places to stay… We ended up staying in the worst place yet to date on our trip as there was no where else to stay having arrived without a booking on a weekend. We weren’t to be phased by this though, after all we were there to see the gorge and not hang about in our accommodation. I had pretty much decided which bit of the gorge we were going to see already, there is a 4km trail near the entrance of the park called the Shakadang trail. After all the cycling we had done I was up for a nice and easy trail and we figured we could walk from where we were staying to the trail head in around an hour.

We headed up to the entrance of the national park after we had checked into “Fawlty Towers” to see if we could get more information and maps for our walk the next day. The lady in the national park information office was super helpful, provided us with a map and broke the news to us that the nice easy trail I had my eye on was SHUT! Oh no! However, she suggested some other trails in the park we could do instead that would require us catching the bus to get to them. This was something we had been keen to avoid as from our research on the blogosphere the buses sounded infrequent, inconvenient and congested. Now we were here we really didn’t have much choice in the matter. It was get on with it, or sit in Fawlty Towers the next day twiddling our thumbs which was not something we were keen to do!

We headed back to our accommodation as dusk was falling. The next major draw back of Xincheng soon became apparent. The dogs we had seen earlier in the day looking all peaceful and sleepy in the hot Taiwanese sun were now a lot more active. The ones which were chained up were ok, they couldn’t get to us no matter how much they barked and growled. The ones which were roaming free though were much more scary and we both walked silently and swiftly willing that we might get back undetected. This more or less worked, but there were a few that would start hurtling along long paths towards us barking and growling, eek! We made it back to the sanctuary of Fawlty Towers, but we still had the small problem of finding dinner. After our terrifying walk we decided to play it safe and go to the closest place possible to where we were staying which happened to be a 7-eleven. This was about half a kilometre away. Again we walked swiftly and silently, even more on edge now as it was dark. We could hear barks and growls in the pitch black and our nerves were on edge. Having made it there we ate what food they had on offer and then returned back through the gauntlet of dogs back to our accommodation.

The next day we got up early and headed for the train station to meet the first bus. We got on and there was tons of space, no issues so far that we had read about. We stayed on the bus the whole way to the top to the Baiyang Trail which took over an hour. The walk along this trail takes you to a tunnel that has waterfalls running inside it. It was only a couple of kilometres and was an easy walk which suited our tired legs. The scenery was beautiful and we took our time admiring the views and playing in the waterfalls. This trail did not disappoint our expectations of Taroko Gorge. 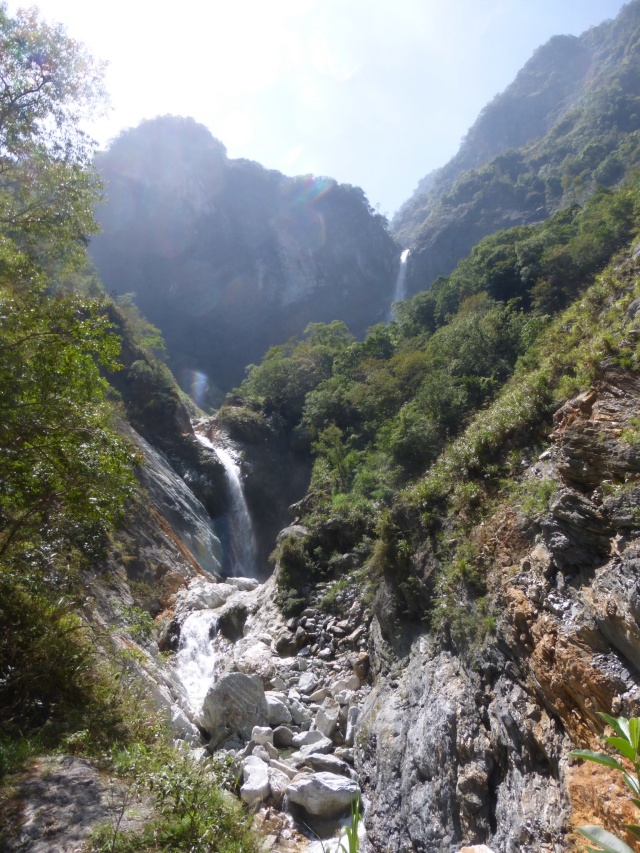 After this we intended to hop back on the bus one stop to the Lushui trail. This was another short trail that the lady in the information centre had suggested. We got back to the bus stop just in time to see a bus leave. The next one was due only 20 minutes later so we settled down to wait. After 20 minutes had been and gone it was soon becoming apparent that the buses weren’t running to schedule at all. We ended up waiting over an hour in the end. We had to make a decision about whether to go to Lushui or Swallow Grotto which was the other trail recommended to us as we wouldn’t be able to do both now in the time left. We opted for Swallow Gorge as it was further down the gorge towards where we were staying in case we did end up having to hitch hike our way out!

Swallow Gorge was a massive disappointment after Baiyang. Yes, the scenery was pretty, but the trail was next to a road. This meant you were dodging the masses of people ambling along the trail whilst trying not to get run over.

At the end of the trail, which didn’t take very long, we opted to keep following the road back up the gorge to the previous bus stop. This wasn’t because we fancied the walk, it was because we had seen the chaos as we got off the bus at Swallow Grotto. The bus stop was swamped with people and it was every man, woman and child for themselves to get on the bus. Given that there is only one bus roughly each hour and there weren’t many buses left that day, I was going to make sure we weren’t left behind! The previous bus stop was at the Tunnel of Nine Turns which sounded awesome, but was also sadly shut on our visit. We figured it would be quieter here and we could get on a bus. After another hour wait we were successful, we got on the already packed bus. We were standing but most importantly, we were on!

We got back to Fawlty Towers around dusk. Not fancying a repeat of the previous nights walk we opted to take the bikes and pedal as fast as possible to the 7-eleven hoping that by moving faster we would attract a lot less canine attention. This proved to be successful and we ate another convenience store dinner before pedalling like the wind to get back home again.

The next morning we checked out of our accommodation, bid farewell to “Basil,” and pedalled back past the scenic beaches vowing never to set foot in Xincheng again.

So, what would we do differently if we were to do it again? We would probably have stayed put in Hualien and caught the bus up to the gorge from there. The buses we were using were running from Hualien and also there was one which runs from Hualien before the first bus in Xincheng. If we had caught that bus it would have bought us an extra hour allowing us to do Lushui as well. Or alternatively we could have just skipped Swallow Gorge which was quite frankly a bit rubbish compared to Baiyang.

This entry was posted in Taiwan and tagged Taiwan, Taroko Gorge. Bookmark the permalink.

2 Responses to How not to visit Taroko Gorge